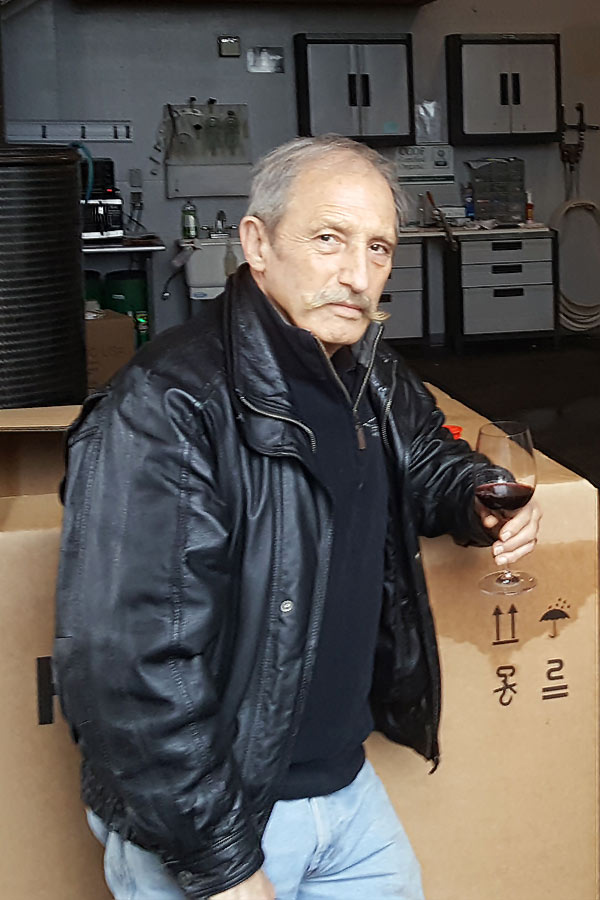 Sonoma, CA (February 08, 2018) – Georgós Wine, an emerging wine company that has taken the best of American innovation and Greek tradition and handcrafted it in the heart of the Sonoma Valley, is proud to announce that its winemaker, Robert Rex, will be honored at the 2018 American Fine Wine Competition (AFWC) Charity Wine Gala in Florida this May. Rex will receive his honor for Georgós’ production facility Deerfield Winery, and will be honored alongside winemaker Ernie Weir of Hagafen Cellars and Prix Cellars, and wineries Krup Brothers and Robert Biale. Rex is the only Sonoma winemaker and winery among the honorees. The AFWC will host the 11th annual Charity Wine Gala on May 5, 2018 at Pier 66 in Fort Lauderdale, FL 33316. Get tickets here.

Georgós Zanganas, engineer-turned wine company founder and president of Georgós Greek Wines, said, “We are honored to have the benefit of Robert’s expertise and experience at the helm of Georgós Greek Wines. The same care and craftsmanship he brings to all his endeavors surely shows in our wine. We join the AFWC in applauding Robert for this honor.”

Rex started making wine in 1972 in Berkeley, California. He has worked for many different wineries, started wineries for others, has taught winemaking and currently serves as consulting winemaker for Georgós handcrafted super-premium Greek Wines. A “Renaissance man” possessing a great palate and an exceptional talent for winemaking, Rex, with his characteristic handlebar moustache, is a chemist, graphic designer, woodworker, and gourmet cook.  He’s brought a scientific eye and artistic passion to winemaking for forty-five consecutive years—earning him a total of 300 awards. So, this upcoming one makes it 301!

Rex’s winemaking style has its roots in the great French wines of Bordeaux and Burgundy. He believes that the blending of attributes creates the best wines. Grapes from complementary soil types and microclimates are often married to maximize varietal characteristics and complexity. Blends can be of different varietals, grapes from varied appellations, distinct sections of one vineyard or from wines made from the same source but by varied techniques. Robert says that wine making is more like cooking than chemistry – and he makes wine like great chefs create great cuisine.

His theory and practice—blending grapes from different regions and microclimates, and a willingness to take risks—combine to make him the ideal winemaker for Georgós Greek Wines, uniting his artistry with Georgós Zanganas’ premium Greek grapes and healthful formulations to give the best of both New and Old worlds.

Rex’s AFWC honor comes on the heels of Georgós Wine releasing its five latest vintages, available direct from the winery, at Whole Foods Market in Northern California, and at fine restaurants in San Francisco and Los Angeles.

Georgós believes that the wines represent not only super-premium quality and flavor profiles at a value, but also a healthful choice in wine, which he calls “nu.”

Why? Georgós imports the highest quality non-GMO and sustainably grown fruit from Greece (as well as non-GMO grapes from Sonoma) to make Greek wines appealing for the American palate: fruit forward, soft tannins, and clean tasting. His wines are blended, finished and bottled at Deerfield Ranch Winery in Kenwood, Sonoma Valley (known for their “Clean Wine®”)

And for Georgós, the “nu” extends across the winemaking process. He explains:

“We hand-pick and triple hand-sort all of our grapes to remove anything foreign—bad grapes, stems, foreign objects—’everything but the grapes.’ In the end, we only have the best quality grapes. This tends to reduce the toxins and bacteria.

We keep a very clean fermentation environment, and monitor the yeast for stress.

In wine, histamines can result during the fermentation process by an interaction of the yeast and bacteria. By reducing bacteria in the fermenter, we reduce the source of unwanted histamine production.

Sulfite is used to keep the wine from prematurely oxidizing during the barrel-aging-process and to protect it from excess oxygen pickup during bottling. SO2 attracts the oxygen and becomes non-reactive (inert) SO3. We do not release our wine until the low levels of SO2, react with the free oxygen picked up by the wine and is reduced to non-reactive levels. Georgós Wines are lower in sulfites—15ppm on average—than most wines.

Finally, Greek wine generally has a lower alcohol content, which could mean that Greek wine would produce fewer headaches.”

The partnership between Rex and Zanganas perfectly exemplifies Greek cuisine, which is apart of the phenomena known as the Mediterranean diet – considered by many to be one of the tastiest cuisines but is also one of the healthiest.

The Greek diet emphasizes fresh fruits, vegetables, wild caught fish, poultry…and red wine. Along with eating in season and locally, Greeks consider wine as an integral part of their diet. Why eat this way? Because it is pleasurable and fulfilling to do so! Of course there is science to back up this claim, like how monounsaturated fats like olive oil are better for your heart, how ingesting omega-3’s found in wild fish is excellent for brain health, or the many facts about spinach and why you need it. However, this diet didn’t start out with Aristotle’s scientific theories, but rather with ancient cultural commitment to good food and drink.

Rex brings the artistry and keen understanding of what works flavor wise that we’ve come to expect from great Greek cuisine, while Zanganas brings his industrial engineering and his QPS principle: very high quality grapes, offered at great value and his passion in crafting healthier Greek wines locally. They are committed to creating wine in the traditional Greek style, and the result of the partnership has created magic in a bottle – something delightfully flavorful that is also healthy to enjoy in moderation.

With Georgós, wine lovers can have the most flavorful and healthy wines in five distinct varieties, each combining unforgettable names of the Greek islands with mythology:

Santorini, “Sophia’s Smile”: a 2017 Assyrtiko similar to a dry, crisp Sauvignon Blanc that has citrus aromas with a rich, earthy mineral character, and the acidity to stand up to meat and seafood with notes of lemon and apple. Unoaked. The grapes for the 2017 vintage of Santorini are at this moment crossing the Atlantic; Georgós plans to bottle them in March.

Ios, “Aphrodite’s Kiss”: a 2017 Dry Rosé of Agiorgitiko (until recently the most commonly cultivated grape in Greece) that has all of the flavor of a Pinot Noir with the crispness of a Sauvignon Blanc. Fermented with skins on for 16 hours, it contains hints of apple and peach. Unoaked.

Mykonos, “Wine of Hercules”: a 2013 vintage Agiorgitiko in the Pinot Noir style that is both light and delicate yet flavor-forward in a Burgundy tradition, with a nose of strawberry patch, a touch of allspice, pepper and sandalwood. Earthy flavors include maitake with a pleasant and multi-layered finish offering faint notes of licorice.

Ithaka, “Penelope’s Spell.”: a 2015 blend of California Cabernet and Old-World grapes that is dry and big, yet gentle for a Cabernet. Its perfectly balanced and delicious. The nose is a true Cabernet, offering bits of leather, currants and blackberries.

The grapes might seem familiar, but the Greek spin is unmistakable – so is the luscious flavor and commitment to craft and health.